verb
1.
cause (an event or situation) to happen or exist.

“an allergy can be triggered by stress or overwork”

Often a trigger for alcoholics & addicts to want to pick up may be an unhappy or tragic memory. It can sometimes be easy to determine what’s triggering the reaction (conscious awareness), or it can at other times be something more diffucult (subconscious). The thing is that often, a triggered epidose feels like being “blind-sided”, and the only warning is a sudden, bad, feeling.

In the mornings at my place of employment, staff usually turns to Youtube on the flatscreen tv, and everyone walks or exercises to whatever music is playing, for 30-45 minutes.
The staff are a diverse bunch of people, so the musical selections can be just about anything.
Recently, I had a rather disturbing reaction to the morning tunes…

Someone wanted to listen to Prince, (his death still being so recent) so we watched his videos for close to an hour.

I loved Prince. I loved his music, I loved his mystique, I loved his dancing, and I loved how beautiful he was to look at. 😚 He was a musical genius, he was eloquent with words, and he was charming. I discovered that day, that his music triggers me.

I tried to sing along (I know more of his music than I don’t), and I watched him singing and dancing, and I felt…not great. To say I was surprised would be an understatement. It had been many years since listening to Prince’s tunes, and I do not recall having that kind of response, ever before.

It took me a few minutes to figure out what was bothering me -during which time I alternated between paying attention (I mean, IT WAS PRINCE!) and trying to distract myself, as the uneasy feeling grew in my gut.

As far as I can tell, this is what happened:
I listened to Prince Rogers Nelson from the time I was in high school until about the time I got sober, during which time I ingested a whole lot of drugs and alcohol.
The saying in those days was “sex, drugs, and rock’n roll.” Those 3 things were the whole point of life, as far as I could tell, and while I doubt anyone would categorize Prince’s work as “rock ‘n roll”, in my experience, there was a ridiculous amount of the other two going on.
During this period, his music really was like the soundtrack of my life. Most any song you could mention of his, even ones who were made famous by someone doing a cover, from (about) 1979-1993, will bring back a ton of memories. The problem being that there are a lot of those memories that I really don’t want to remember.
You might not realize this, but the life of a female addict tends to be essentially, one fearful, chaotic, and sometimes traumatic situation after another.

Apparently, on a deeply subconscious level, Prince’s music is synonymous with that time, for me…now, to clarify, I’m not saying that this situation brought up feelings of wanting to use, cos that’s not the case. If I hadn’t spend such a long time focusing on self-care, it surely could have been like that.

I felt uncomfortable that morning, even moreso seeing how everyone else appeared to be greatly enjoying the music, dancing, etc., and not knowing exactly what to do. I really wanted to leave, but equally didn’t relish the thought of explaining myself to my Supervisor. So, I prayed; I forced myself to think of music that was almost the opposite of the melodies playing, and I took a bathroom break. (And repeated)

Yes, I’ve been working with PTSD for most of my “adult” life. I don’t talk a lot about it because a), it’s become more of an undercurrent when it comes up, as opposed to the tsunami it’s been in years past; and b), I feel like the majority of (Normies) don’t put much stock into non-war veterans really having post-traumatic stress disorder. I know better, but I’m not looking to invest my emotional energy into arguing about it with ignorant folks.
So, that’s my recent “trigger” story. I know that music effects many people strongly, so I wanted you to know that it happens to many of us.

Posted from my cabin far from Paisley Park.

Ok, I’ve always been a person in love with music. This was re-enforced when I spent so many years in my teens & early 20’s as a “band wife”. (I’ll admit it: I had moments when I thought I was THE sh*t.) It was in the 80’s, so I know it dates me, but I don’t think I’d have wanted to miss out on the spandex & Aqua Net for ANYTHING. \m/ (cue “Quiet Riot” Bang Your Head) 😉 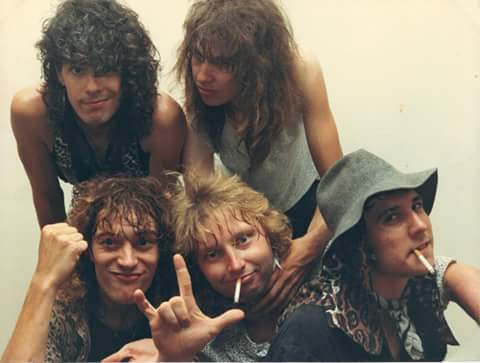 Anyway, a little more than a decade after that period is when I crawled into the Rooms of recovery. They told me I only had to change one thing (everything) , so that included music.

As a young child, I was fed the Beatles, Rod Stewart, Elton John, Jim Croce, Carol King, and the other biggies from that era as a steady diet. I will always hold a place in my heart for them, as they take me back to the time before my parent’s divorce. Back to when life was, at least, predictable.

Then toward the climax of my carousing days, I remember Bob Seger, Terrence Trent D’Arby, Prince (still love that man), and most of the late 80’s post hair-band groups.

When I got clean & sober, I became aware of what my potential triggers were, and the (bar) music was a HUGE trigger. I had previously spent a LOT of time in bars. My bff and I knew where to go for “ladies night” for at least 5 nights a week, and of course the bar was always the quickest place to cop some dope – whatever you prefer, so, yeah.  Heck, my bff & I MET at a Ladies Night. I remember when Barfly (movie with Mickey Roarke?) came out & we all loved it. It was pretty accurate. Now I think it would be pretty depressing to me.

So, once I began getting sober, I eventually cut out all of the tunes I’d gotten drunk and danced (that’s both sad and funny, but I won’t go into it now) to, and for a minute, I was kind of lost. The secret to getting a grip on early sobriety, for me, was to never remove something (dangerous)  without replacing it with something at least neutral, and preferably positive. I think I initially went back to the music of my pre-self-medicating days. If the radio was playing in the car – when was it NOT??- I kept my guard up for any “old drinking songs”. Pretty simple cure: change the station. Stay out of bars (sometimes people think they can go there & get healthy. I’m not aware of ANYONE who was successful in recovery using this tactic. If you do, please let me know!), and if you’re with people who don’t care about triggering you, maybe change your friends.

After a few years in the Rooms, I started working on a new relationship with the God of my understanding, and nowadays I play only “positive encouraging” (KLOVE) stuff. It really does encourage me, and it gives me healthy and productive things to think about, in contrast to the things the other music bombarded me with, like…well, basically, that old lifestyle.

Music has been a backdrop for my entire life. While the speed amd tempo has varied, the subject matter of what I feed my mind, as I live a clean & sober life, has adjusted accordingly.

Someone smarter than me once said “show me your friends and I’ll show you your future.” To a large degree, that works for music too. Play me what you’re feeding your mind and spirit, and I’ll tell you about your future with mind-boggling accuracy.  (It boggles my mind, anyway, and I’ve seen it play out in relapse after relapse.)

If you live long enough to get a few years in recovery, I daresay that you’ll be able to tell newcomers what their likely future will be.

So, to my best recollection, that’s my Early Recovery Music story, and I’m stickin to it.

A Bed for My Heart

Notes from a Not-Quite Neurotypical

Life, Nature, and the Pursuit of Happiness

Message in a Bottle
Jetpack — Essential Security & Performance for WordPress